It is an old cliché, that you can’t get anywhere without taking a single step and in relation to local government it has been something that has always been at the front of my mind…how do we continually make small steps for a big difference.

Since creating the framework I continually think about how my thinking needs to be challenged using the overarching aim of “open by default – digital by design” as well as the supporting principles.

One area where shifting our thinking away from the “grand plans” and “big visions” to something more simple and essentially smaller would actually present a much better outcome all round is customer relationship management systems…the fact that it is called a system, worries me but that isn’t really where my concern or issue lies. Also it is worth me stating that I do see value in something like a CRM in some areas of public services but we really shouldn’t see it as a panacea across all services just because it suits us or because we are technically able to.

Fellow LocalGovDigital colleague and peer Phil Rumens wrote a very interesting post titled “The Internet of Broken Things”  < this is well worth a read and I suggest you go and visit it and check it out before reading any further really….

…If you did return (thank you) or in fact never left then I’ll continue.

The conversation that Phil and I had, had been along the lines of essentially flipping everything on its head and not trying to create a “system” to manage contacts but in fact adopting an open by default, digital by design approach and see each service request as something that anyone could subscribe to and receive updates – I’ve had conversations with Dave Briggs around similar things where he spoke of local government as one giant bug tracking system, open for all to see – this is essentially that. It was about saying should we care who reports things and stuff – does it matter whether 1 person reports 300 potholes but yet 3000 people subscribe to updates on progress…the important aspect is that a fault is reported and then if we open that up through the web, api’s or via maps etc then anyone could see it and decide on a personal level whether they wished to receive a set of updates.

Phil sums it up nicely by saying:

Rather than raising a new case for every broken thing, it means that people could subscribe to information about specific assets. Rather than 100 reports about the same thing, councils would store 1 report and details of 100 people who have subscribed to receive updates about it.

For me we have focused too much time and money on trying to develop, implement and create solutions to manage customer relationships through complex and simple systems. The focus has been how as a service do you effectively manage a set of requests to provide a response.

However I’d like to suggest that we change that focus and stop trying to push all of our contacts into a single system for us to manage behind firewalls and security layers and start opening up the requests so that everyone can see what actually needs to be done…that way we may find people help each other or subscribe to updates that other people have identified.

The approach in my head is about moving away from a focus on integrating services and applications and instead focusing our efforts on how we integrate data and infrastructure with people and places and how in turn that allows communities to make more effective decisions around the outcomes they want to see and the local public services they require to meet the needs they identify. It is really about how we design ourselves out of the system…

I created a little sketch of this whilst at a meeting convened by NLGN and hosted at O2’s offices in London last week where I was sat next to the wonderful Catherine Howe: 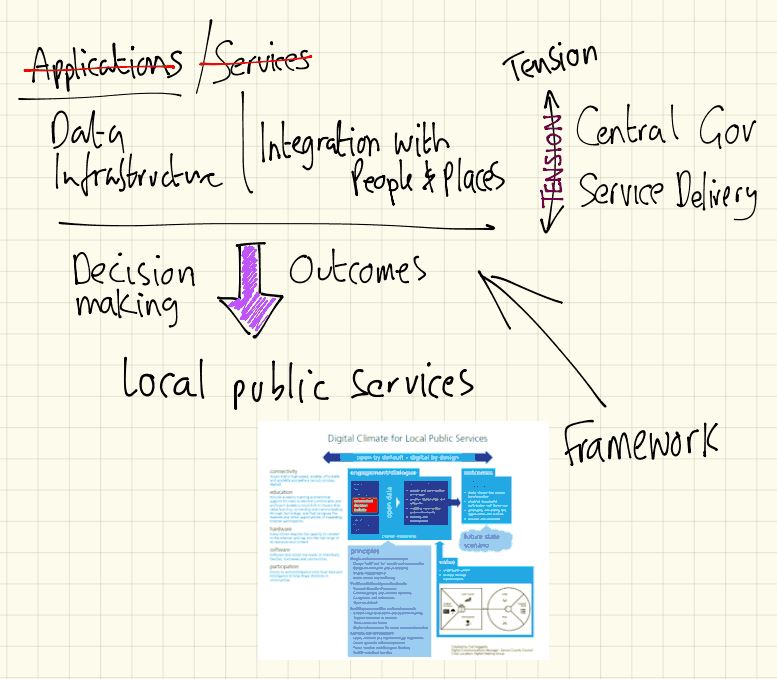 The tension on the right eludes to aspects of local government being an extension of central government delivery and also it highlights again the issues surrounding the PSN and I’m not for a second going to go over any of that here. Others are in a far better position to provide commentary in this space.  However I’m only suggesting it is a tension.

Now one of the additional complexities which I’m yet to square in my head is how local government deals with the multiple roles we play and how these help or hinder communities.

The three broad roles I see are:

The first two are generally the main focus of conversation and also focus within the digital agenda and are the two most facing significant change and challenge, but the third is the more complex area as we have actually designed a level of dependency into the system which creates complex and wicked problems in solving and devolving aspects of the first two. I hope that makes sense…

Coming right back to the beginning…..It is an old cliché, that you can’t get anywhere without taking a single step…I’m thinking about how we can continually make small steps for a big difference in relation to all three of these areas.