This evening saw the LGC100 list announced and I am very proud and also nicely surprised to be included and in particularly in making the top 50.

This is a huge nod to the achievements and recognition of the work of the people around me at the council as much as it is for me. This is also a huge nod to the group of volunteers who work in and around LocalGov Digital.

The LGC 100 list looks ahead to who the panel of judges believe will exercise most influence in 2015. According to the LGC website the judges were instructed to consider who will have the greatest influence, rather than who they would like to see holding power. Phew as I’m unlikely to be anywhere near the top 100,000 if it were about power 🙂

The bio about me was nice and I didn’t even have anything to do with it, it said:

In an environment where more and more councils aim to bring about “channel shift” in order to give the public better access to services and cut staffing costs, his work could be significant over the next few years.

To say I’m proud is an understatement, it is a great achievement and I only hope I can live up to the expectation and promise over the next 12 months. I certainly have clear aspirations to do exactly that. 🙂

Last night I had the honour of being announced winner of the Guardian Public Services – Leadership Excellence Award.

We were informed the results were close and I was blown away when my name was announced. In fact shocked – I literally couldn’t believe that I had managed to win through a public vote. A special thanks has to go to Dan Slee who started a campaign and was relentless in encouraging people to vote for me.

I would also like to thank everyone who took the time to vote, not just for me but for the other incredible short listed candidates.

I was fortunate to be able to share the moment and evening with my wife Sharon who always provides incredible support and encourages me to grow.

I was also able to share the moment with Councillor Barry Parsons (Devon County Councillor and Cabinet Member for Performance and Engagement). It was great to get another opportunity to help raise the profile of being open by default and digital by design to local councillors.

I want to thank the members of the public leaders editorial board who nominated me and I managed to actually meet some of the board at the awards which was great.

There are so many individuals who have helped challenge my thinking and shaped my leadership skills over the years. But the following people deserve to get a special mention as some of the biggest contributors to who I am today.

Thank you – I very much value your insights, challenge and conversations. You may not know it but you are all an inspiration to me.

I also want to acknowledge the other short listed candidates as I admire them all and have huge respect for what they have and continue to achieve and I just hope that I can do them and myself proud moving forward.

I particularly want to acknowledge Mike Bracken – executive director of digital, cabinet office who has had a huge impact on the digital space in the public sector – for that I must thank him as it has made my job a little easier.

Whilst I recognise the relationship between local and central government isn’t always a happy and productive affair – Mike’s vision and leadership has had a huge positive and constructive disruption on local government and me personally. I’d love to have a conversation and hopefully work with Mike on how we can bridge that gap and look at how the relationship, skills and approaches can be developed an extended across local and central government.

Another thing to celebrate is that Devon actually won two awards last night, who said Devon wasn’t a hub of innovation 🙂 The Northern Devon NHS Trust won the Partnership Excellence award – we were championing Devon and were absorbing the ambiance of the fantastic venue right to the very end. 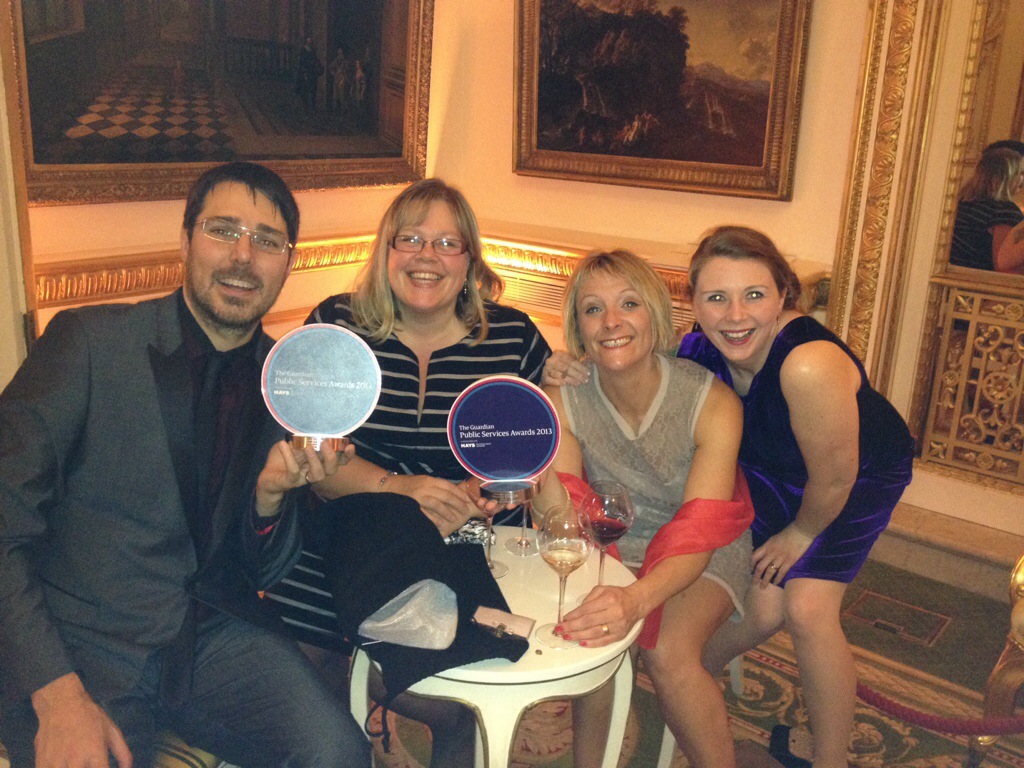 Finally I’m so proud to be representing local government and all those who work tirelessly to improve people’s lives.

We all do amazing work and we should all find the courage to stand up for those people and communities we serve.

A few weeks back I was notified that I was included on the Public Services Award: Leadership Excellence shortlist. Public voting closes on 21st October – #VoteCarl…

Initially when I first heard I was like “WTF?” but after a while and after some grounding conversations with colleagues and my family I became personally proud and honoured to be included in the list given the outstanding quality of the other candidates.

In the time since it was first announced I’ve had so much positive feedback and people have said such wonderful things. I’ve received praise and congratulations from so many people including The leader of the council, the chief executive, my line manager, my Heads of Service, other Heads of Service, lots of internal and external peers and colleagues and even some teachers at my children’s school.

What all of this has done for me personally is fantastic, it has cemented some confidence, it has nudged me forward, it has challenged me to think about my impact and influence on the people around me at all levels but most of all it has made me think about the type of leadership I’ve demonstrated to justify being nominated in the first place.

In a part of the world not always renowned for its innovation, Haggerty is building on his fundamental belief that local government is, and should, be “open by default and digital by design” and that every citizen can and will “meaningfully integrate the internet into their daily lives” to provide active and capable participation in a ubiquitous digital climate.

Haggerty, who also chairs the LocalGov Digital steering group, has been shortlisted for his energy and openness in pursuit of pervasive digital awareness and education, which has included an innovation month at Devon county council. “He’s doing something remarkable in a place you might not necessarily expect,” according to the Public Leaders Network editorial advisory board.

The interesting thing about all of the things that have been mentioned is that – and as a close friend pointed out – none of the things I have achieved are original or even my ideas…so they were quick to state that I was a fraud, but a worthy one…I’ll take that in a good way 🙂

However that doesn’t mean I don’t believe those things and want to work to make them happen, because I do – in fact I’m very passionate about the the future of local government, the digital climate for local public services, I want to help my council and others understand this space and to move forward. I do believe that being open by default and digital by design is fundamentally critical to public service design and I am very proud of being able to sell the idea of a month of creativity to our Corporate Leadership Team and then rally others around me to help make it happen. I’m also very proud of being Chair of LocalGov Digital which is full of people I admire and respect hugely and we are all on a collective journey and no one is better than anyone else – we simply work well together.

But the point that my colleague pointed out is correct, in that none of these things are my ideas – to a degree – I’ve been reusing, reframing and adopting other peoples ideas and bringing them together and where possible (hopefully) adding value, ever since I started working in this area. I’ve not got the answers and I know other people don’t either but together we can find our way through, What I try and do is make sense of those things and then through my blog and other channels try and share some of that thinking or ask questions.

In relation to the blurb about me I’d thought i’d provide the background to the bits it highlights so you can all know where this stuff originated.

I think what has happened is that I’ve somehow managed to nudge some things forward, to help other people, to inspire other people and to be open about all those types of things in my blog – I seem to have demonstrated a type of leadership which some wish to recognise.

Everyone on the list deserves the award in my view – it is clear why they all deserve it – am I suggesting I deserve it more, no not in the slightest…in fact I’m only doing what I’m paid to do…this is what my job, my manager, my team, my service and my council expects and demands of me.

I’d like to believe that everyone working for the residents of Devon deserve an award – everyone knows the context and challenges people are dealing with in their everyday work life. I’m lucky I get to share my thinking, I’m in a role that exposes me more to a wider group of people. This is also replicated across every council area in the country – It isn’t easy working in the sector right now…it is full of uncertainty, full of fundamental change, but in amongst all of this people do the jobs that they are expected to do and more and I’m proud to be part of that team.

I think one of the contributing factors to be noticed, let alone nominated was my blog and my general level of activity of twitter – So i’d like to encourage more people to be brave and share their thinking, to take that first step and be open to challenge and constructive feedback. Not to win an award but to connect to a wider group of people who can and do help you.

I’ve been asked whether I want to win and yes of course I’d love to win (I would really love to win – #votecarl), but do I feel I deserve to win over the other candidates…no not really but that is something for anyone who votes to decide.

Whatever the outcome I’m going to enjoy this moment and enjoy the awards ceremony as it has already had a massive impact on my life by simply being recognised as a leader.

To the editorial group who put my name forward – THANK YOU.